NOTE: This hike is going to cover the two routes to Pinnacle Falls (Beech Bottom Falls) that I took on my visit. I did it as one long hike, heading to the platform and making my way back to the split and heading to the base. The routes are about the same in mileage, 1.0 to the platform one way and 1.2 to the base. Doing it as one long hike came to 3.2 miles.

Being new to the Greenville area, most of waterfall focus has been centered on those north of the border so I sometimes forget about the awesome waterfalls in my own state. Beech Bottom Falls is one such waterfall. Located in Pickens County only a mile and a half from 178, it is easily reached. To get to the trailhead from South Carolina, head North on US178 from the intersection with SC11 (Cherokee Foothills Scenic HIghway) for 4.6 miles and make a right onto F Van Clayton Memorial Highway. Follow this for 1.4 miles to the large pullout on the left. The parking area is signed for Beech Bottom Falls. I parked at the gate a hundred yards down the road. If you do so , don’t block access. To get to the trailhead from NC, head south on US178 from Rosman NC. drive 11.7 miles and make a left on F Van Clayton Memorial Hwy.

To reach the official viewing area: Once across the second bridge the trail is going to ascend for a time along an obvious route. In places the drop off on the right is fairly steep as the path follows the contour of the hillside. A bridge spans a small drainage along the way before the trail is helped along by groupings of steps. In most places there are no more than 5 or 6 steps.

The trail is now high above the creek. At 0.8 of a mile from the trailhead the ascent will stop and over the next 0.2 of mile the trail will lose about 200 feet of elevation as it snakes to the viewing deck. As you get closer to the platform an ominous sign warns that the waterfall may ONLY be viewed from the official trail or platform. The mountainside deck is perched high above the falls at a crappy angle. Between the deck and the falls the mountainside is covered in trees which severely impeded the view in February. Unless they send in a team with chainsaws to clearcut and deforest the hillside, by mid-spring you won’t see anything but leaves and trees. If you look closely at the river right from the deck you can see the handrails lining the lowest part of the old trail.

It is nice that they put in this new trail but as I looked at the view I had to believe that the person who elected to put the deck here was the same one who positioned the deck at Bearwallow Falls in Gorges State Park. My guess is this platform will get a lot of first time visitors but not a ton of repeat hikers, unless they’re just out for a nice walk in the woods.

NOTE: A recent Facebook discussion hinted that stripping the hillside was part of the plan, although I’m not sure how deforesting a hillside is a better option for providing a good view than better positioning of the deck. Even without the trees, the angle is bad. I could Photoshop the trees out but even so, which view would you rather have? 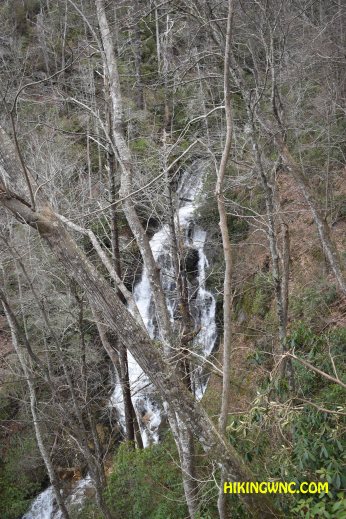 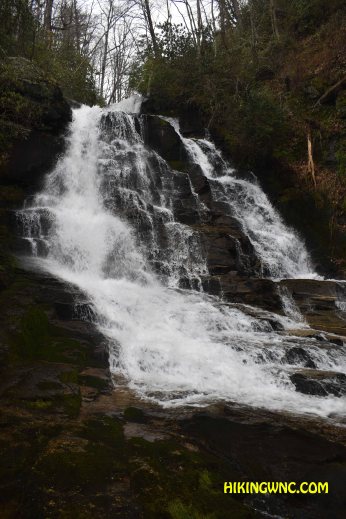 To reach the base: From the first crossing of Abner Creek you are faced with three options. A sign pointing to the official trial leads to a second creek crossing. There are a pair of logging roads to chose from. The one on the right heads downstream as it climbs up the steep grade the one to the left takes a level route. You want this one. After passing close to a very nice 8-10 waterfall on Abner Creek, the road will turn away from the creek to a crossing of a small tributary. There are several places along the first hundred feet of this fork where you can drop off the left side of the road to check out the small waterfall below the second bridge.

Getting across Dogwood Creek (the small trib) was accomplished via some rocks and logs in the creek and completed with dry feet. On the other side of the creek the road heads up and to the right. Not twenty feet up the hill an overgrown road goes to the left. The start of the road is thicket of briers and for much of the 0.3 of a mile you will be pushing through briers. The road is easily followed as it ascends and descends along the top of the ridge before finally topping out just over 0.3 of a mile from the crossing. Another road did intersect on the left near the end of the road but it doesn’t lead to the falls. It ends not too far from the split.

Where the road ends on the top of the ridge an obvious trail continues straight ahead. It was easy to follow and before long it begins into a series of switchbacks as it begins down the steep hillside. The sides of the trail are bordered with logs to prevent erosion and other than one section of downfall, negotiating the trail provided little challenge until close to the end. After passing under and around a rocky outcrop, two large hemlocks have fallen over the trail, forcing you to climb up the hillside to get above the exposed roots to continue on the trail. Even in a drizzle this wasn’t difficult and coming down the other side a second root ball would keep you from sliding down the hillside.

The trail will began to descend more steeply at this point but it is guarded with handrail for most of this final stretch. The handrail logs are older but they were sturdy enough to use. By the time the old trail ends you will be at creek level on the exposed rock on the river right of the falls. There was also an old viewing area at the side of the falls that gives a very limited view. From the rock at the base you can see the old platform on the other side of the creek. You can also see the new platform high above. Not surprisingly the best view of the falls isn’t from any of the three man-made platforms but from the viewing area created by Mother Nature, the large open rock area.

It is amazing down at creek level and it would be a shame if access to this area was ever restricted. I did keep an eye out for any signs indicating I was entering an area that was closed off or restricted and there was nothing to indicate this older route is illegal. If this changes I will update my directions to omit anything illegal. In the mean time, this old route is going to give you the best view by far. In lower water it was totally possible to get to the old viewing deck but with the rain coming down I didn’t venture across. I will save this for another day. The same goes for venturing down to the lower falls. 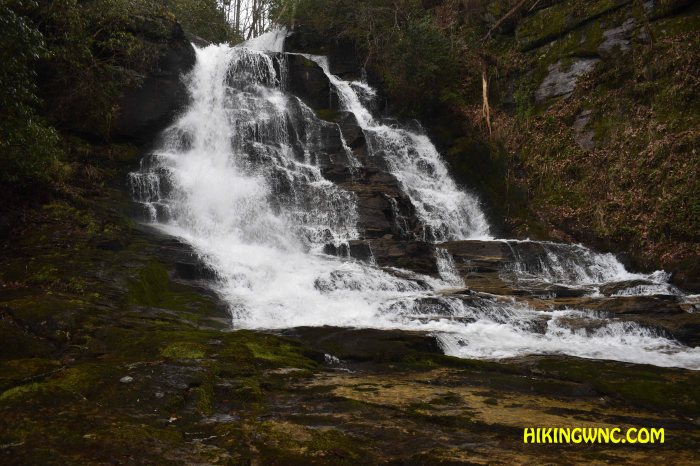 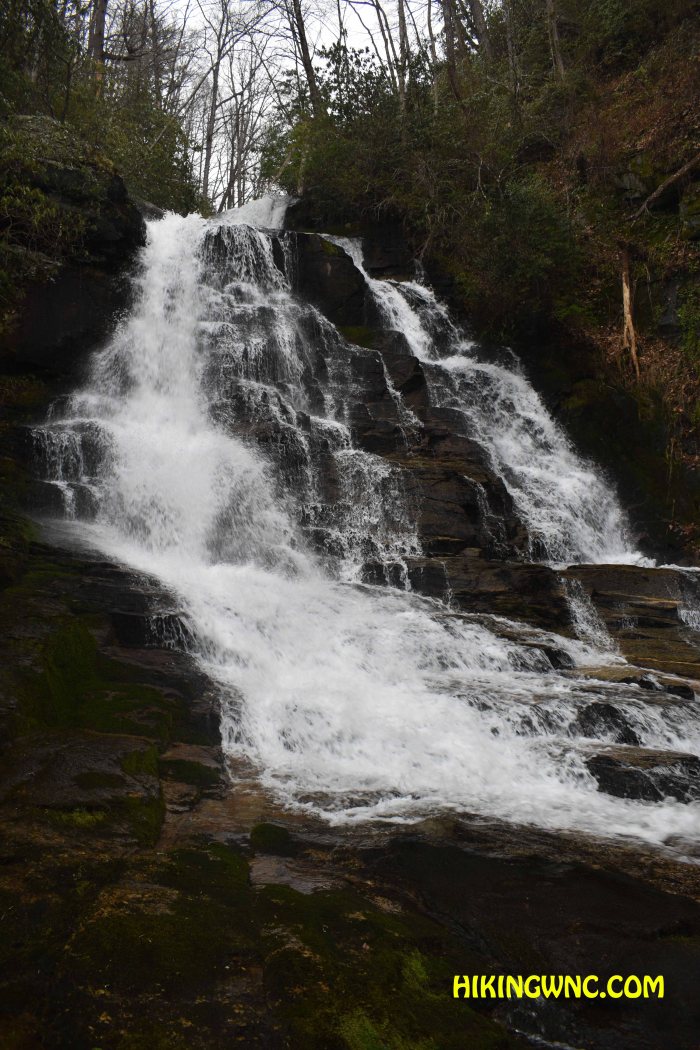 The Waterfalls of Fork Creek